Home Uncategorized Sin Sod – What You Should Pay to Marry Your Thai Girlfriend
Uncategorized
June 2, 2016 stefan 0

Sin Sod – What You Should Pay to Marry Your Thai Girlfriend

Sin Sod – What You Should Pay to Marry Your Thai Girlfriend 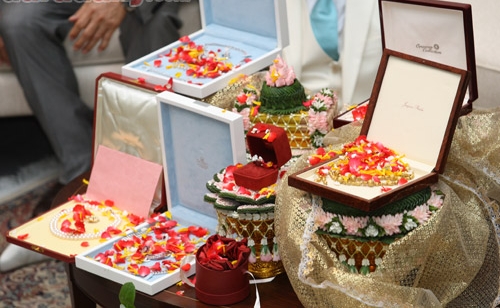 You will find a huge amount of misleading information online regarding Sin Sod, and conflicting experiences can be found plastered all over forums and blogs. So, when a foreigner wants to marry his Thai girlfriend and the inevitable subject of Sin Sod arises, it is no surprise that he becomes confused over what he should be paying and why he is expected to pay it.

Part of the problem is that Thai women often don’t explain the concept of Sin Sod very well, which isn’t at all surprising, considering that for them it’s a standard tradition and an age-old part of Thai culture. And like traditions the world over, some people simply participate and follow along without ever understanding the history behind it.

Fortunately, I am lucky enough to have a cross-section of Thai friends from varying backgrounds, and being the nosey parker I am, I have endeavoured to collect as much information as possible regarding this tradition.

Of course, if we want to know the truth about Sin Sod, the best people to ask are Thai people themselves. Yet like many Thai customs, I find that foreigners have a gross misconception of what Sin Sod is all about, inherited largely from other misinformed foreigners.

Before I begin, I am not by any means saying that the information in this post is entirely definitive or one hundred percent historically factual. However, what I can say is that the information is the experience of a cross-section of Thai people, all of whom are university educated, have experienced many Thai weddings and are well-versed in Thai culture.

What Sin Sod Is Not

Firstly, let’s get one thing straight: Sin Sod is not a dowry. You are not buying a woman or approaching her family to buy her. The Western-centric viewpoint that Sin Sod equates to the purchasing of a Thai bride is completely incorrect.

To fully understand the tradition, you need to put the word “dowry” out of your mind, not least because any suggestion to your future in-laws of purchasing their daughter will be very offensive.

What Is Sin Sod?

There are generally three reasons for the payment of Sin Sod; they are as follows:

1. Traditionally, the eldest unmarried daughter takes care of her parents until she gets married, and therefore the Sin Sod in some respects replaces that income for the parents. As you might know, it is common for the average Thai woman to send a portion of her salary to her parents each month.

After marriage this usually stops, so as you can imagine, for parents with no pension plan and little savings, the Sin Sod is a much needed payday. Now you can see why richer families don’t usually accept this payment or expect it, quite simply because they don’t need it.

2. Once a woman has been married, and/or has kids, the structure of Thai society makes it very hard for her to find a man of decent stature. Therefore, the Sin Sod acts as a sort of insurance in the event that the husband leaves her and doesn’t offer post separation financial support. The bottom line is, women don’t walk away with half of everything like they do in some Western countries.

If a woman finds herself back living with her parents as a single mother, the Sin Sod insures that there will be some money/land in the family to support the family. Thai society also dictates that the older a Thai woman gets the harder it becomes for her to find a job, let alone a well-paid one. So again, should she find herself alone in the future, at least the family will have some money put by for some inevitably rainy years ahead.

3. Where poorer families are concerned, Sin Sod is a repayment for the money invested in their daughter. Many families sell land, borrow money and generally go without to put their kids through university, or in some cases to simply put food on the table. The Sin Sod is essentially a repayment for that investment. The amount paid for Sin Sod could be considered relative to the sacrificial cost of bringing up the child – thus the reason it is often referred to as payment for the “mother’s milk”.

6. Age is a contentious and quite horrible issue when it comes to Sin Sod. I mean, when ex childhood superstar singer Tata Young, at almost 40 years old married Prame, the son of the FairTex boxing brand owner, she commanded 100 million Baht. But for a 40-year-old woman from a poor, rural family and a few kids in tow, it’s unlikely that more than 200,000 Baht would be on offer. That said, the type of guys such a woman would have access to wouldn’t be able to afford more than that anyway. But who knows, occasionally a rich man does fall for a poorer woman in good old classist Thailand, and to show his wealth he would no doubt slap down a hefty sin sod.

And so age comes fairly low down on the list. Sin Sod is generally decided by status, family wealth, family name and accomplishment/education of the female in question.

Any man marrying a Thai woman is expected to pay Sin Sod. The price is usually agreed between the two families, yet where a foreigner is concerned and his parents aren’t present, the duty falls on him to ask the family how much they expect.

In the modern day many families don’t expect Sin Sod, and many will tell the boyfriend that they don’t want any money. However, it is very rare that money isn’t shown at the wedding, albeit that it is returned in full afterwards.

*It should be noted that to expect the money back or to ask for it back is unacceptable. One will be offered it back if that is to be the case. Also note that you may not be required to pay Sin Sod if the woman you are marrying has been married before. See the section below for more details.

How Much Should I Be Paying For Sin Sod?

Historically this has (generally) depended on six factors, as listed and discussed below:

1. If your girlfriend is from a well-to-do family, you could be looking at a fair lump. However, in this situation, the money will most likely be for show and returned to you after the wedding.

2. If your girlfriend is university educated or beyond, then it is likely that you will be looking at a minimum of 300,000 Baht. This is a low-moderate amount by modern-day Thai standards. For example, a friend at my girlfriend’s work is soon to marry a Thai lady of a high school level education, and he is paying 200,000 Baht. His salary is approximately 25,000 per month.

3. If your girlfriend has been married before, then you should pay less. You might argue – on grounds of tradition – that you shouldn’t be paying at all. However, as a respectful gesture, and to show your respect, you should offer something.

4. If your girlfriend has kids, tradition dictates that you should pay less. This stems from the age-old thinking that she is tainted in some way, already given to another man, so to speak. You will become responsible for another man’s seed, and for that you shouldn’t be paying for the privilege. (Not my words, I might add)

5. In terms of a woman’s employment, it’s hierarchical and usually correlates with education and earnings. For example, you’d pay/show more to marry a banker than a cleaner.

My Girlfriend Is Asking For Too Much

Many foreigners find themselves in this position, and it isn’t necessarily that your girlfriend is trying to con you, more so that she is trying to secure higher face for her family, and in some cases to elevate her family’s wealth.

Face is everything in Thai society. To marry a foreigner with a Sin Sod of less than 200,000 Baht, would be quite a loss of face, not just for her but also for you.

The fact that she is marrying a foreigner will mean tongues wagging in the village, so when you say, “What! No way! I am not paying to marry you”, or you announce a payment less than what an average Thai guy earning 10-15k a month would pay, you get branded a “Farang kee-nock” (literally translated as bird shit foreigner, but refers to a poor, lower class foreigner), or “Keniiow” (stingy).

The folks in the village will have a good laugh, “Why is she marrying a foreigner when he can’t afford to pay anymore than one of us folk”. Yes, unfortunately most Thais believe, as many westerners do, that Thai women only marry foreigners for financial security, unless of course the Thai woman is richer or as wealthy as the foreigner.

Anyway; the point here is not to take your girlfriend’s word for it,because the tradition is that you are supposed to ask the mother and father the amount they want. It is not for the woman to tell the man what she wants. So arrange to meet with the parents and politely ask them what they expect.

They will probably say one of two things:

The first answer doesn’t mean you say, “Okay, great”, and go and buy a new car instead. By answering in this way they are exercising their “grengjai”. They are being polite. What they actually mean is, “Tell us what you WANT to pay, and you will be able to tell by our body language whether we think it’s okay or not”. So basically you need to make out you really want to pay. As you can see, this all falls in nicely with the non-confrontational Thai style.

The second answer means, “What do you want to pay… but don’t insult me”!

*It should be noted that some families might genuinely want nothing at all.

I Hate This Talk Of Money – It All Seems So Shallow

As a foreigner, you may feel like you are buying your girlfriend and have become a victim of the old “Thailand ATM” syndrome. And depending on the circumstances, that could be the case. But if you’re in a secure, genuine relationship, you need to forget what the misinformed barstool gossips say and consider your girlfriend and the culture, and yes, she too needs to consider your wallet.

Like it or not, Sin Sod is a big part of Thai culture, and, as soon as a Thai woman announces marriage, the big question on everyone’s lips is, “How much Sin Sod“.

Why? Because Sin Sod is a reflection of her, you, her family and your family.  A Thai woman lives to make her family proud, to show the other villagers that they are a good family, that they are to be respected, and that they are on the up, as it were.